AngularJS or Angular: What and how to choose

AngularJS or Angular: What and how to choose

To be really honest, we had no idea that this question is still blooming in the minds of many. As we are now at Angular 4, and soon at Angular 5, still talking about the right choice between AngularJS and Angular seems a bit strange. Yet, as this question appeared on our twitter account, here we go:

As this is mainly an Angular beginner question, maybe it’s for the best to start with a simple description of the Angular platform.

Angular is an open-source front-end web application platform. The company is led by the Angular Team at Google. As all open-source platforms out there, the platform is backed by a community of individuals and corporations that constantly improve the platform and its functions. Different for HTML, for example, Angular lets the developer to declare dynamic views in web-applications and to create incredible environments in maybe half the necessary time.

Another great thing when it comes to resources is that open source platforms such as Angular have are lots tutorials, code and general data on the forums to help in case of need. So almost everyone can learn it...or at least can try to learn it.

Some will say the Angular2 is an extension of AngularJS, yet things are quite different. Angular 2 is not the continuation of the Angular platform, but rather a different and unique platforms, specially created to better fit the needs of frontend devs in the days of mobile and user-first requirements.

When having to choose between JS and 2, some of our programmers recommend Angular2, while others will go for AngularJS. The syntax of the two and the functionalities are quite different, leaving some space for discussion and even disputes on what platform to choose. So, we've listed some of the main differences of the two:

As in almost all cases, the choice of the platform depends on a lot of external factors. Someone with some previous experience in TypeScript will be more susceptible in choosing Angular2, while someone with a back in JS deployment will most surely go for AngularJS. The project also dictates the platform. If there is an express requirement to use JS, well...you will have to use it, and the same goes for Angular2.

For those that are not that familiar with JS or with TypeScript, Angular2 may seem a somehow better idea, as it is compatible with Angular 4&5 and vice-versa. In the end, it’s really a matter of personal choice.

A personal piece of advice: if you have the possibility before deciding, try to install both of the versions and see which one takes less time and fits your requirements.Then, proceed :D

Hope this helped at some level.

P.S. Don’t forget (if you want, of course) to share in the comments section below, what version you have selected and maybe even why you've made that decision. 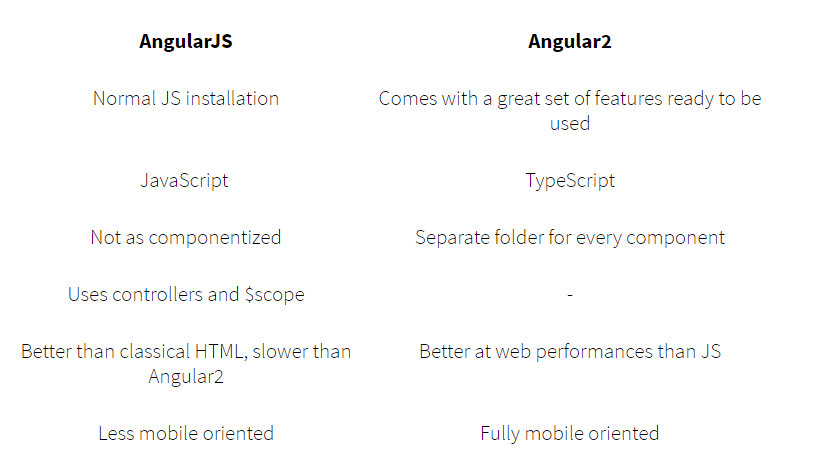 Follow our stories and see what we’ve been up to.